After reading Jo Gakonga’s blog post  Making the most of TP observation, which is based on an idea by Marie Therese Swabey for using chatrooms in TP observation, I was so looking forward to trying it out.

That was in October and here we are in November and I’m ACT on a CELTA course in Barcelona.  When I mentioned the idea to the MCT here, he too had read Jo Gakonga’s blog and was very much up for giving live ‘chatting’ in TP observation a go.

I first tried it out when the trainees were observing me teach the Pre-Intermediate class in TP on Day 2.  It seemed to be an ideal opportunity to see what the they thought of the idea.  I decided to use Padlet as I thought the anonymity factor would give them some freedom. It is also so easy to use and share with no signing up / registering, no sharing of personal information so no issues around privacy and it is versatile and fun with many useful features.  I asked them to get QR code reader apps and gave them the QR code to share the link.

They all appeared to participate and they posted some really perceptive comments, clearly picking up on classroom management issues mentioned in the input session earlier that morning.  I was really encouraged by this.

Then I realised that the new ‘shelf’ feature in Padlet would be perfect for TP with six trainees in a group.  I tried it out the next day in TP2 explaining to the trainees that it was an experiment and that, of course, if they didn’t like it, we wouldn’t continue.  However, I was thrilled to see that they really did.

I am so excited by this as it’s already such a radical change to TP observation in terms of engagement. It’s trainee generated now and they really seem to be getting a lot out of it.

There are only observations for 1-5 because trainee 6 was absent for TP that day.


Well, we’ve finished Week 3 now and motivation has been sustained. Feedback from the trainees after TP is based on what they have posted on the Padlet for that TP session. The observers identify and expand on what they’ve posted on Padlet in TP feedback.

I think this is also going to provide a very useful resource for the Lessons from the Classroom assignment because peer observation is all there written down for them to refer back to and reflect on. 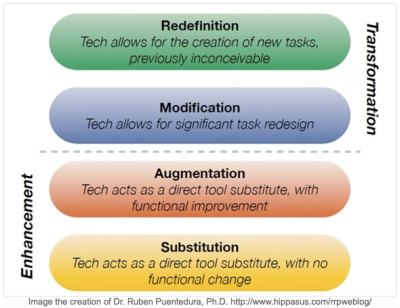 Using the SAMR framework to evaluate the impact of technology, I hope that I have progressed from merely substituting tech for paper and pen because I think the use of technology has provided functional improvement in that feedback is live, collaborative and engaging.  I feel we have arrived at the augmentation stage. However, I’m looking forward to progressing further.

As suggested in Jo Gakonga’s blog, I’d like to encourage the sharing of lesson plans and handouts. It is easy to see the rational in providing trainees with the tools they need to promote more efficient feedback in observation so trainees can assess how effectively the plan supports delivery and see what the students are expected to do in the lesson. I absolutely love the idea of taking and uploading photos of boardwork (this is actually happening now as examples of good boardwork are beginning to emerge).

I would also really like to join in the live chat to direct and guide the trainees’ feedback during observation rather than post-observation as this would be far more effective but this would necessitate changes to TP tutor feedback paperwork.  I think a freelance CELTA tutor would definitely need the support of co-workers to fully implement live ‘chatting’ in TP observation in order for it to be truly transformational.  As a freelance CELTA tutor, I do hope I am fortunate enough to be in that position in the very near future.

Many thanks to Jo Gakonga for sharing on her blog and to Marie Therese Swabey for having such an inspired idea.

I've been teaching since 1997 and training since 2010. I am CELTA, DELTA qualified with an MA in Educational Technology & TESOL and I'm currently studying on an MA TEAP. View all posts by fionaljp